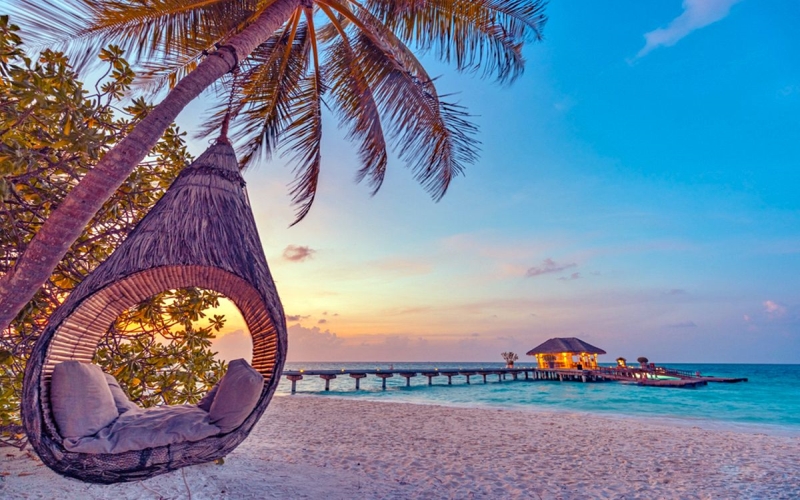 The Indian subcontinent is a beautiful peninsula surrounded by three different oceans on its three sides, with the majestic Indian Ocean to the south flanked by the Arabian Sea Bay of Bengal on the west and east coast, respectively.

Unsurprisingly, India is home to some of the most stunning and serene beaches in the world, and Indian travellers love visiting beaches both in and out of the country. Here, we reveal the top 8 beach destinations worldwide for India travellers

Goa, being the party hotspot of the entire country, is known for its stunning beaches, exuberant nightlife and exquisite resorts. The Goan coast is also home to one of the most popular beaches in the country, such as Benaulim Beach.

While the tiny state has over 35 beaches, Benaulim Beach stands apart for the variety of fun activities that it offers, such as paragliding, jet skiing and dolphin gazing, without the crowd and swarms of tourists, unlike other beaches in the area.

Benaulim Beach is especially known for its ethereal sunset views and garners a lot of attention for the same. It is thronged by beach bums trying to witness the sunset in the evenings and is something you shouldn’t miss out on your Goa trip.

The Jumeirah Beach in Dubai is unarguably one of the most photographed beaches in the UAE. You can easily recognise the beach from numerous pictures of the iconic Burj Al Arab, which overlooks the beach.

Known for its unmatched level of extravagance and sophistication, the beachfront is lined with luxurious resorts like the Address Beach Resort and the Jumeirah Beach Hotel.

You can lay back and relax on the soft white sandy beach or opt to engage yourself in activities such as jet skiing and paragliding. If you are lucky, you can catch camels walking by the beach!

Nestled between a grove of lush green palm trees, Gokarna Beach is one of the most acclaimed beaches in India, and for all the good reasons.

The beach not only has aesthetic values, including the breathtaking views, the white sands and the extravagant resorts in and around the region but the beach itself is also shaped like the Hindu symbol Om, which is considered to be extremely holy and spiritual in India.

The green terrains surrounding the region make the beach a wonderful spot for all kinds of adrenaline junkies, as they can explore a plethora of activities, from hiking and trekking to water-based activities such as parasailing and jet ski rides.

Thailand is a hotspot for Indian travellers and witnesses a huge inflow of tourists from India every year. It is impossible not to fall in love with this beautiful country and even more beautiful beaches!

Phra Nang Cave Beach is especially one of the most unique beaches in Thailand that you shouldn’t miss on your trip to the country. The beach is accessible by a fun boat ride, with stunning views of offshore limestone caves.

Rather than going for the usual water-based activities such as surfing or snorkelling, you can try your hand at rock climbing and other fun challenges instead here.

Aptly located in Kerala, also called “God’s Own Country”, stepping into Varkala does feel like entering a whole new world of serenity as the lazy town remains calm in the morning and lights up at night, with beach shacks and bars buzzing with energy, good food and people from all over the globe.

The Varkala Cliff is a unique beachfront in the area, overlooking the blue waters of the beach, with a beautiful stretch of long coconut trees and greenery in the backdrop. The view from the cliff, along with the restaurants and cafes lining the cliff selling fresh fish and lobsters, booze and cool drinks, is definitely a must-visit.

Kerala is also known for Ayurveda and yoga camps that thoroughly rejuvenate your soul. Janardhanaswamy Temple, or the Varkala Temple, is a famous temple in the area which stands tall and majestic despite being aged over 2000 years.

While most islands in the archipelago are occupied exclusively by luxurious private resorts, the Thulusdhoo island has some of the most secluded and authentic beaches in the Maldives, where you can enjoy local flavours with ample privacy while staying on a budget.

Thulusdhoo has one of the best surfing spots in the country and gorgeous reefs with thriving aquatic fauna and flora, and you might even catch dolphins swimming around if you are lucky.

While it sure seems like most of India’s best beaches are located down south, the northern part of the subcontinent also has a few feathers to add to its cap. One such beach is Mandarmani Beach in West Bengal.

The expansive beach is also fondly referred to as the longest motorable beach in the country, giving you the freedom to whisk through the coast on a motorbike and feel the wind, sun, sea, and sand to enjoy the ultimate thrill of biking.

Fortunately, not many are aware of this beach and Mandarmani has managed to stay relatively outside the radar of most travellers, thus helping to preserve the serenity of the place, and the beach remains pristine and clean.

No list of the best coastal towns in India is not complete without mentioning Radhanagar beach in Havelock Island, part of the Union Territory of Andaman and Nicobar islands.

Unlike most beaches in India, which are golden sand beaches, the turquoise waters of Havelock Island hugging the white shore of the beach, with picture-perfect views of the thick jungle towards the entrance of the beach, truly makes you wonder whether you are indeed in India.

Radhanagar Beach is the perfect haven for a fun and relaxing beach getaway, where you can while away your time by simply swimming in the waters, enjoying good food or getting yourself checked in at one of the luxurious resorts around the beach, offering the best retreats.