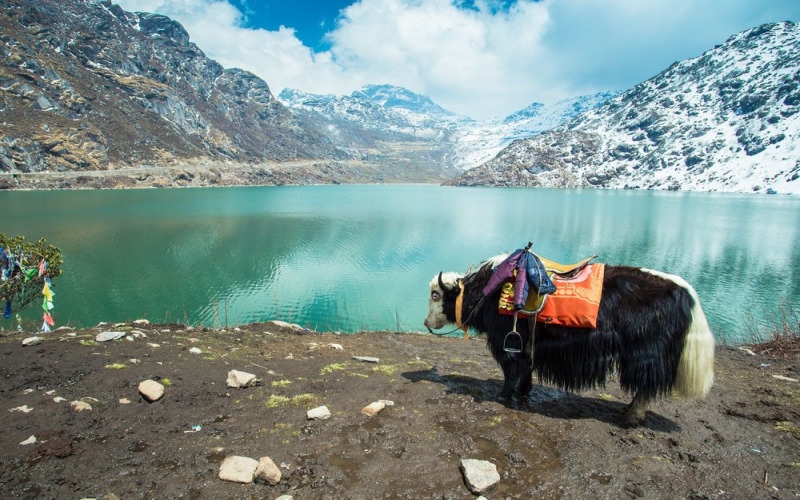 The plummeting temperature in India evokes a feeling of wintry bliss that excites travellers to embark on a rejuvenating winter vacation. There are plenty of places to visit during winter in India to elevate your travel game and indulge in travel experiences that you will cherish for a lifetime.

Look for cheap flight tickets and winter deals on accommodations to ensure that you stick to your budget while also enjoying your winter vacation to the fullest.

Read further to find some travel inspiration in this roundup of the best winter destinations in India.

Gulmarg is a hill station and town in Kashmir that is a famous spot for skiing. The town receives heavy snowfall from January to February and is open for tourism throughout the year.

The snow-clad landscapes and frozen lakes only enhance the charm of this destination during winters. Snow activities like snowboarding and skiing are pretty trendy among tourists. Gulmarg Gondola – the second highest cable car project, is another top attraction in the hill station.

Those who wish to escape the smothering heat of the summer and want to witness Himachal Pradesh in all its glory must visit the resort town of Manali. During winters, the entire landscape is covered by a blanket of snow, and most local hotels offer hefty discounts.

The tourist hotspot during this season is centered around Mall Road, where you can also find plenty of dining options. Ski enthusiasts can head to Solang Valley, Marhi, Gulaba or Dhundi to indulge in thrilling winter sports.

The scenic town of Kufri is surrounded by the Himalayan ranges and is also popular among winter vacationers in Himachal Pradesh. The winter months are freezing and typically last from October to March.

Kufri is another paradise for ski lovers, and during the peak winter season, the place is crammed with people who thoroughly enjoy this thrilling activity. The breezy hills and snow-covered forests make for the best adventure activities in the region.

Located in the Kutch district of Gujarat, the Rann of Kutch is a milky white saline land that makes for a surreal winter vacation. Inhabited by many communities, Kutch is known for its diverse communities and is occupied by the Muslim maldhari (cattle-herder) communities in the north and Hindu communities in the south, mainly consisting of entrepreneurs, seafarers and traders.

The Rann of Kutch Festival, or Rann Utsav, is the most sought-after festival by tourists during winter. During this festival, visitors have an adventurous experience as they get to camp outdoors in beautiful outdoor tents in the middle of the Rann of Kutch. Parasailing, camel safaris, dirt biking and long walks across the vast salt desert are other activities enjoyed during the winter.

Winters in Sikkim’s Gangtok can be pretty chilly, with temperatures dropping to 4°C; however, the region does not receive any snowfall. The winter months in Gangtok are crowd-free and will allow you to explore the area at your own pace. Shrouded in thick blankets of fog and a serene atmosphere, the unique hill station has some exciting activities and things to see and do.

Nestled in the north Indian state of Uttarakhand is the Himalayan hill station of Auli. Since December is the peak tourism season in Auli, hundreds of tourists flock to the hill station to have a great time at this skiing destination.

Overlooking the magnificent peaks of Neelkanth, Nanda Devi and Mana Parbat, Auli, during the winters, lets you experience a completely different sight. With many ski resorts dotting the region, you will find adventure seekers on their way to tame the snow-clad slopes. The northern province of Auli is home to the Hindu pilgrimage site of Badrinath Temple and the beautiful Valley of Flowers National Park.

The offbeat town in the state of Arunachal Pradesh is another attractive winter destination. From Buddhist monasteries, mesmerizing mountain ranges, ethereal lakes and valleys, the sightseeing spots here will leave you feeling overwhelmed.

Although difficult to reach during winters, the glorious views in Tawang are worth the trouble. Se La is a mountain pass that is the gateway to the town and connects it to the rest of the country. The high-altitude pass soars at the height of over 4000 meters and also features the serene Sela Lake. The valleys are dotted with vibrant prayer flags and historic monasteries that are worth the visit. Cultural events such as the Torgya Festival and Losar are also popular during this season.